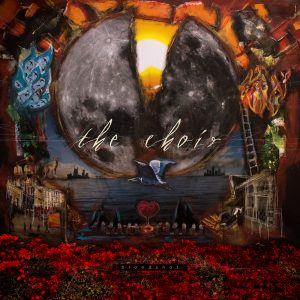 Nashville, Tenn. (May 2018) ? The Choir continue to explore and reveal, whether crafting adventurous new sonic textures or shining a light into shadowy corners of the heart. With Bloodshot, the Nashville and Los Angeles based alternative rockers push at the borders of their spacefaring sound while uncovering intimate truths, compelling generations of fans to return and relate. Bloodshot releases June 1st, 2018.

?We launched this album alongside the reissue of [1989?s] Wide Eyed Wonder,? says drummer and lyricist Steve Hindalong. ?That album was about the innocence of a newborn baby. Contrast that with Bloodshot, which is about us in our 50s.? We?re weathered and world-weary, and we?re certainly not innocent. But we still see beauty in life through bloodshot eyes.?

Hindalong continues a pattern of unflinching personal revelations through his lyrics, and Bloodshot collects perhaps his riskiest statements ever. The joyful highs and tearful lows of marital life have been chronicled in past songs like ?Sentimental Song? and ?Sad Face.? At Bloodshot?s core is a story of brokenness and rebuilding.

The 34-year marriage fans had glimpsed through the prism of Hindalong?s lyrics has ended, and the writer appraises emotional damage both inflicted and sustained. ?Only Reasons,? ?Birds, Bewildered,? and ?House of Blues? speak to the unraveling of a relationship that both partners expected to weather all storms. At the songs? root is a commitment to extend mercy to loved ones in turbulent times, and to rise from disappointment with grace and integrity.

?This record is the most bruising we?ve made,? says guitarist and singer Derri Daugherty, who had witnessed the tumult. ?I knew how hurt he was and how hurt she was that they couldn?t make it work. Once Steve started sending me lyrics, I thought, ?Wow, this is really going deep.??

When asked what sets the Choir apart, Michaels describes an intense and symbiotic relationship with its audience. ?Ultimately, we cast our net deeper than wider,? he says. Support extends beyond buying albums and tickets. While making Bloodshot, the Choir broke the fourth wall to allow eight fans to actually perform on the album. ?It?s a testament to mutual trust with our fans that we can bring them this closely into our process,? says Michaels, proudly. ?They were really good contributions, too,? says Hindalong. ?It was risky, but successful.?

Since the release of 2014?s Shadow Weaver, the Choir has toured North America three times and traveled throughout Europe. Hindalong released his solo album The Warbler in 2016, and Daugherty releases The Color of Dreams in July. Both records stoked the creative fires that produced Bloodshot. Bloodshot Street Date is June 1st, 2018 and available HERE http://smarturl.it/thechoirbloodshot